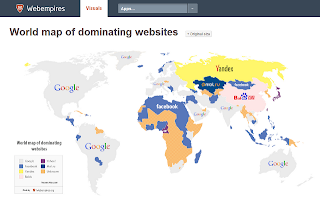 If you had to guess what website is dominating the world, you would probably say it’s either Google or Facebook. We wanted to see the whole picture, so we’ve made a map of #1 websites around the world.

Yes, Google is the boss.
If you were betting on Facebook, you were off by a large margin.

What may come surprising (or not at all) is that Facebook is not lighting up across American continents. It’s far from taking over Europe, too. If this was a game called “Risk” and your objective was to take over the entire world, it would be clear that Google is winning. However, Facebook it is on its way of taking over Africa and fighting some really tough battles in Asia.

The map above includes #1 websites in each country, based on traffic rank (Alexa data, for want of anything better). It doesn’t include properties. Google’s traffic is scattered across nearly 200 domains for local versions of Google (google.se, google.lt, google.co.uk…). Google also owns 23 of the top 100 websites in the world, making Facebook pale in comparison.

Big in Japan
You thought we forgot Yahoo? Not at all, it’s not forgotten. It’s #1 in Cameroon, but the real highlight is Japan. Not only Yahoo.co.jp is #1 in Japan, it’s also ranking #15 in the entire world. Japanese really love Yahoo. Note: Yahoo! and Yahoo Japan are separate companies. Yahoo Japan is a joint venture between Yahoo! and the Japanese internet company SoftBank. It is listed in Tokyo Stock Exchange.

Polar bears and Google
Website of choice for polar bears? Google! As Microsiervos pointed out when covering our post, Greenland has enough internet users to show up on the map. These are either the few people living there or polar bears, reindeers and seals are finally adopting the Internet technology. [Webempires]
Dipublikasikan oleh batlax.com pada pukul 11:02 PM