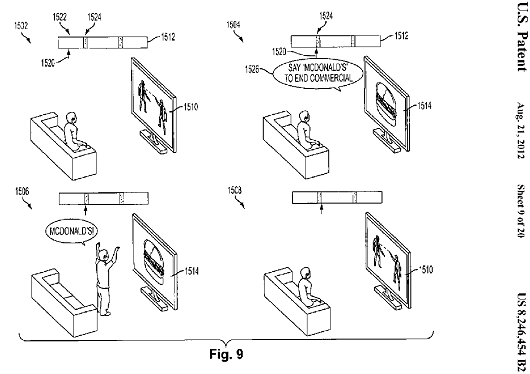 Sony's patent provides visuals of various implementation processes, some of which include using the PlayStation console itself, along with the PS Eye, the Move or DualShock controllers, or a microphone. The controllers would allow viewers to play mini-games designed to sell products while they entertain, and they would enable people to purchase items directly from the ad. One drawing shows someone ordering a pizza by using the Move to select a large "Buy" button, and another has someone voting for a character with the X, O, square and triangle buttons.

The patent also shows a microphone hooked up to the PlayStation console, enabling viewers to vocalize whether they want an action or romantic commercial. Another voice-input idea makes viewers yell out brand names to continue their shows, pictured above.

The patent appears to work with internet TVs or screens attached to network-enabled devices, such as the PlayStation. If you've yet to disable your cable and hook up your PC to an HD flatscreen, now may be the time – or maybe consider that Steam Big Picture box when it launches. They can take our TVs, but they'll never take our PCs.
Dipublikasikan oleh batlax.com pada pukul 9:42 PM